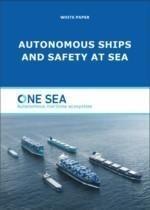 A new white paper from the One Sea Ecosystem outlines the significant contribution autonomous ship technology can make to improving maritime safety and highlights the urgent need for a revised regulatory framework.

One Sea, the high-profile industry alliance that brings together leading exponents of autonomous ship technology, has released a new white paper focusing on the relationship between ship safety and autonomous technology.

Available to download free of charge, the paper examines the safety advances achieved by and expected from autonomous ship technology, with the aim of driving the consultative process forward towards a revised set of maritime regulations. It considers today’s safety framework, cybersecurity, views from ship owners and operators, consequences for labour and insurance, and the classification implications for varying levels of autonomy, before offering a proposal for next steps by the industry.

In his foreword, Capt. Eero Lehtovaara, Chairman of One Sea, writes: “Not only can autonomous ships greatly contribute to increasing productivity, bolstering sustainability and improving working conditions at sea; direct and powerful contributions to enhancing maritime safety have also been identified.

“Technology advances however are dependent on regulatory frameworks. As a group of technology pioneers with some of the world’s most distinguished marine automation technology innovators and enables, One Sea has considerable knowledge and expertise to share as new rules and regulations are developed.”

The need to develop harmonised international safety rules covering autonomous ships is now pressing, the paper goes on to argue. As a priority, One Sea seeks to engage regulators, insurers, representatives of maritime labour, training establishments, flag administrations and classification societies in the dialogue that to shape the future of autonomous shipping to the satisfaction of all.

One Sea Senior Ecosystem Lead, Päivi Haikkola, comments: “Our aim at One Sea is to assist in the development of safe autonomous systems in global shipping that could lead towards an effective operational maritime ecosystem by 2025. Collaboration between all stakeholders in the field is essential to address the challenges of digitalisation and the development of autonomous systems.

“One Sea stands ready to offer its further support to regulatory efforts at every level, including through contributions to the International Maritime Organization. The One Sea ecosystem plans to set the course for new industrial standards. In doing so, we invite all stakeholders to participate fully due to their likely consequences for maritime safety, and for facilitating new business models, reducing shipping’s carbon footprint and opening new commercial opportunities.”